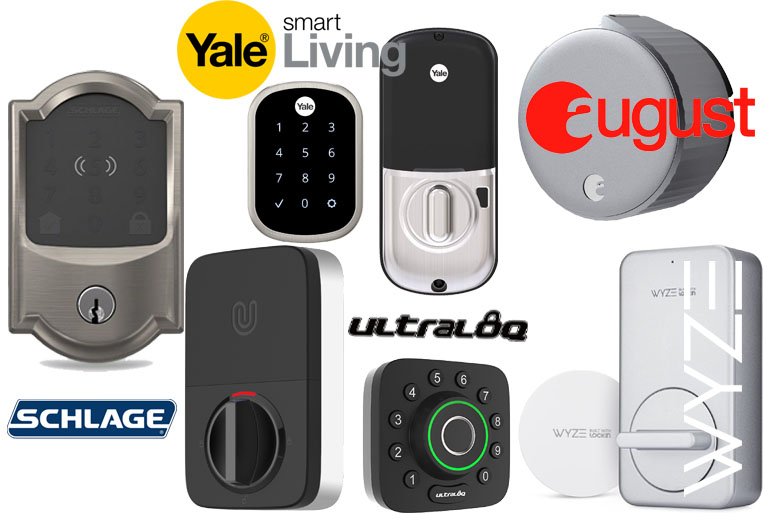 5 Best Smart Locks for you Home

Best Smart locks will keep you safe and secure while also allowing you to forget the need for keys. A smart lock is, without a doubt, the most crucial component of a genuinely smart, connected house. It will not only let you come and go as you like, but it will also keep track of who enters and exits your home while you are away. Some types merely allow you to open and close doors with your phone.

To improve your existing lock, the August Wi-Fi Smart Lock contains a retrofit August lock and a DoorSense open-close sensor. This smart door lock type has Wi-Fi, so you won’t need to purchase a Connect module to gain remote access. August’s Wi-Fi Smart Lock is also 45 percent smaller than prior generations.

For voice control and smart home integration, this smart device works with Siri, Google Assistant, and Alexa. You’ll have limitless user access and keyless entry credentials, as well as a log of every activity at your front door. When you’re not at home, Wi-Fi allows you to lock and open your door from your Android or iOS device.

U-Ultraloq tec’s U-Bolt Pro is one of the most versatile smart locks we’ve seen at premises in London. It contains a keypad that allows you to utilize permanent and time-based temporary pin codes, and it uses a mobile app to lock and open your door from anywhere using your phone, as do most versions. A fingerprint scanner is also included, as well as a keyed cylinder buried under the keypad. As if that weren’t enough, the U-Bolt Pro can be locked and unlocked using voice commands, making it one of the first smart locks we’ve tested to do so.

A loud alarm is a strong deterrent if someone tries to tamper with your lock. In the event of a break-in, the Schlage Encode is our pick for the best smart lock with an alarm, as it will emit a deafening sound.

The Schlage Encode Plus is a terrific combination of a manual, keycode, and remote-controlled lock that also supports Amazon Key, which allows an Amazon delivery person to open the door and store your products inside the house when they come. They are less likely to be stolen because of this characteristic. You can effortlessly combine the lock with your Smart Home system because it supports Alexa, Apple’s HomeKit, and Google Assistant.

A loud alarm is a strong deterrent if someone tries to tamper with your lock. In the event of a break-in, the Schlage Encode is our pick for the best smart lock with an alarm, as it will emit a deafening sound.

The Schlage Encode Plus is a terrific combination of a manual, keycode, and remote-controlled lock that also supports Amazon Key, which allows an Amazon delivery person to open the door and store your products inside the house when they come. They are less likely to be stolen because of this characteristic. You can effortlessly combine the lock with your Smart Home system because it supports Alexa, Apple’s HomeKit, and Google Assistant.

CONS – No support for Apple’s Homekit at present.

The Yale Assure Lock SL is the slimmest smart lock on the market, with a touchscreen keypad for keyless entry. Because the lock features Wi-Fi and Bluetooth, you can use your app to lock or unlock it, share access, and monitor who comes and goes from anywhere! Your Assure Lock will unlock automatically as you approach the door and will even relock after the door is closed for optimal convenience! You can also use voice assistants like Amazon Alexa, Hey Google, or Siri to lock, unlock, or check current status. The lock is keyless, which means it can’t be tampered with and there are no keys to lend or lose.

It contains an illuminated touchscreen keypad, so you can open your door without using keys even if you don’t have your phone. The Assure Lock is simple to use and instals in minutes on standard doors (1-3/8″ to 2-1/4″ thick) with just a screwdriver.

CONS – It may take a couple of touches for a touch screen to respond.

What to consider when choosing a smart lock?

If you’re looking for the best smart lock for you, there are a few factors to consider before settling on the best model.

Some smart locks use Bluetooth to link to your smartphone, but you’ll only be able to lock the door if you’re close by. If you’re the forgetful sort who forgets to lock the door, a design with built-in Wi-Fi or one that uses a bridge to connect to the internet and transmit instructions from the cloud will ensure it can be locked or opened even if you’re not present.

The smart lock’s appearance and whether it will go in with your existing decor should also be considered, as there are a broad range of options available, from traditional-looking devices that hide their smarts to futuristic designs with keypads and touchscreens.

If you already have a voice assistant in your house, check to see if a model is compatible with it, as well as whether it will work with other smart home devices you currently have, such as home security cameras, video doorbells, and smart lights.

Consider whether you need to grant temporary access to friends and family, and if so, whether the smart lock provides activity logs so you can see who has accessed your home and when.

Is it possible to hack smart locks?

Smart locks, like any other internet-connected gadget, are vulnerable to hacking. Some effective security procedures, on the other hand, will help to reduce the danger. If the smart lock has a default password, change it immediately and choose a unique password that includes a combination of upper and lower case letters, numbers, and special characters, and avoids copying passwords from other accounts. Make that it does not contain any personally identifiable information. Make sure your home Wi-Fi has a strong password and that your smart lock’s firmware is up to current.

What are smart locks and how do they work?

Smart locks are keyless locks that connect to your home Wi-Fi and can be accessed with your smartphone. Some smart locks also have a keypad that can be used to enter a code to unlock them. Most smart locks are compatible with voice assistants like Alexa or Google Assistant, so you can unlock them with your voice as well.

Some smart locks entirely replace your existing lock, so if you want to install them yourself, you’ll need to be comfortable with DIY, while others simply fit over the existing lock and require significantly less DIY.

To develop home automation, many of the best smart locks may be combined with smart home hubs, such as the best smart speakers and smart displays. For example, you can arm your home security cameras and secure your smart lock with a single command, or at a specific time if you’re leaving the house or going to bed. It’s worth mentioning that not all smart locks are compatible with all voice assistants and smart home hubs, so if you already have a smart home setup, double-check compatibility before purchasing.

Find the latest news about Locksmithing in London.

For Residential and Commercial Services

Our Staff is trained to fix everything you need!